ALS, or amyotrophic lateral sclerosis, is a progressive neurodegenerative disease that affects nerve cells in the brain and the spinal cord. A-myo-trophic comes from the Greek language. "A" means no. "Myo" refers to muscle, and "Trophic" means nourishment – "No muscle nourishment." When a muscle has no nourishment, it "atrophies" or wastes away. "Lateral" identifies the areas in a person's spinal cord where portions of the nerve cells that signal and control the muscles are located. As this area degenerates it leads to scarring or hardening ("sclerosis") in the region.

Motor neurons reach from the brain to the spinal cord and from the spinal cord to the muscles throughout the body. The progressive degeneration of the motor neurons in ALS eventually leads to their demise. When the motor neurons die, the ability of the brain to initiate and control muscle movement is lost. With voluntary muscle action progressively affected, people may lose the ability to speak, eat, move and breathe. The motor nerves that are affected when you have ALS are the motor neurons that provide voluntary movements and muscle control. Examples of voluntary movements are making the effort to reach for a smart phone or step off a curb. These actions are controlled by the muscles in the arms and legs.

In the summer of 2014, millions of people started talking about ALS. Keep the conversation going to increase understanding of the disease. 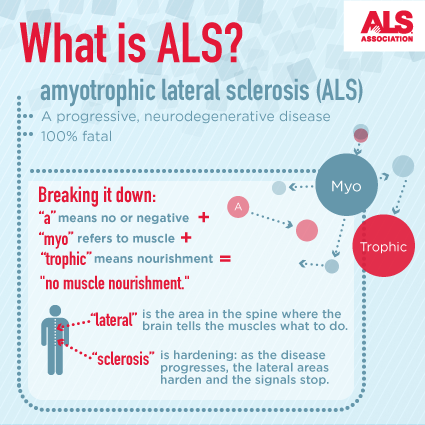 Recent years have brought a wealth of new scientific understanding regarding the physiology of this disease. There is currently one FDA approved drug, riluzole, that modestly slows the progression of ALS in some people. Although there is not yet a cure or treatment that that halts or reverses ALS, scientists have made significant progress in learning more about this disease. In addition, people with ALS may experience a better quality of life in living with the disease by participating in support groups and attending an ALS Association Certified Treatment Center of Excellence or a Recognized Treatment Center. Such Centers provide a national standard of best-practice multidisciplinary care to help manage the symptoms of the disease and assist people living with ALS to maintain as much independence as possible for as long as possible. According to the American Academy of Neurology’s Practice Paramater Update, studies have shown that participation in a multidisciplinary ALS clinic may prolong survival and improve quality of life.  To find a Center near you, visit www.alsa.org/community/centers-clinics.